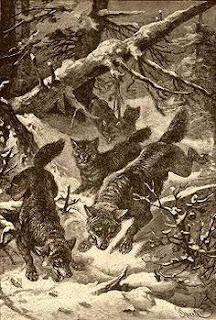 Of the 5 species which come within the scope of the present work, the wolf was the last to disappear in the UK. Wolves used to live in the UK until the 18th century, due to hunting by Ancient Britons. There was a tale of wolf that survived in Scotland until 1888. Scottish wolves and Irish wolves survived longer than English wolves. Wolves arrived in the UK around 11,000 years ago at the end of the ice age. Packs of wolves followed the migrating herds of deer, boar, and grazing animals as they moved North. The United Kingdom became an island approximately 8,000 BC. The subspecies that used to live there are the Eurasian and Arctic. In the last 50 years, British ecologists and conservationists have debated the reintroduction of wolves, along with lynxes and bears. The 1st date of people killing the Irish wolves was in the 1500's and the last known Irish wolf was killed by John Watson in County Carlow in 1786. The last English wolf was killed in Humphrey Head in the 1600's. Some say that wolves should be reintroduced to control deer numbers in parts of Scotland. At least wolves have been reintroduced to Yellowstone National Park, Wyoming in 1995. The Scottish highlands are the perfect place for wolves, lynxes, and bears to be reintroduced. We already know that people would be fine with lynxes around but in Scotland, it would be a little threat to livestock. In December 12th, 2010, 2 wolves were spotted in the Scottish highlands, but it hasn't yet been confirmed. The camera was only able to record for about 8 seconds until the battery died. The reintroduction of wolves to Scotland and England is currently being considered, along with bears and lynx, as part of a larger effort to reintroduce native species to the country. The Ancient Irish had a great respect with wolves calling in "Mac-Tire" meaning "Son of the land." People are mostly interested in Irish wolves than British wolves. The 5 keystone species that should be reintroduced are the wolf, lynx, beaver, wild boar, and grey whale. In 1999, Dr. Martyn Gorman, senior lecturer in zoology at Aberdeen University and vice chairman of the UK mammal society, called for a reintroduction of wolves to the Scottish highlands and English countryside in order to deal with the then 350,000 red deer damaging young trees in commercial forests. Scottish national heritage considered reestablishing carefully controlled packs of wolves, but shelved the idea following an outcry from sheep farmers. In 2002, Paul Van Vilssingen, a wealthy landowner at Letterewe, Achnasheen, Rossshire, in the Western highlands, mainly proposed the reintroduction of both wolves and lynxes to Scotland and England, stating that current deer-culling methods were inadequate, and that wolves would boost the Scottish tourist industry. In 2007, British and Norwegian researchers who included experts from the Imperial College London said that wolf reintroduction into the Scottish highlands and English countryside would aid to reestablishment of plants and birds currently hampered by the deer population like in Yellowstone national park. Their study also assessed people's attitudes towards the idea provided they would be reimbursed for livestock losses. Richard Morely, of the Wolves and Humans foundation (formerly the Wolf Society of Great Britain and Ireland), forecast in 2007 that public support for British wolf reintroduction would grow over the next 15 years, though he criticized previous talks as being too simple or romantic. He stated that although wolves would be good tourism, farmers and crofters had serious concerns about the effect of wolves could have on their livestock, particularly sheep, that had to be acknowledged. My mom says that it would be better to reintroduce wolves than lynxes because wolves hunt in packs of up to 40 members large and lynxes are solitary animals and can hunt in pairs. Wolves are bigger animals than lynxes because my mom thinks that it would take about 6 minutes for the lynx to kill the deer. I'd agree with mom. I think it would also be better to reintroduce bears because they are bigger but wolves are more numerous animals. Scottish wolves hung among the longest until maybe 1680 or possibly 1743. Compared to other European countries, the UK has been slow to reintroduce its indigenous species, despite European legislation encouraging it. Big predators now roam in nearly one-third of Mainland Europe. There are currently 17,000 brown bears, 12,000 wolves, 9,000 European lynxes, and 1,250 wolverines. Wolves would also aid the reestablishment of the rare pine martens and wildcats living on the island. Wolverines also used to live on the island until 6,000 BC due to hunting. Britain might be too mild for wolverines now. Since reindeer have been reintroduced to Scotland and Iceland, it must be okay for wolverines to be reintroduced. I think it's time for them to be reintroduced to the Scottish highlands and Ireland. Fortunately, about 25 wolves were reintroduced to a 1,000 square kilometer region in the Scottish highlands.

Posted by Abe the Cool Conservationist at 3:26 PM