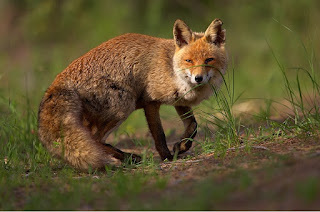 The European fox (Vulpes Vulpes Crucigera) is a subspecies of the red fox native to everywhere throughout Europe except Scandinavia, The Iberian peninsula, and some parts of the Mediterranean sea. It is one of the 4 subspecies of Europe along with the Scandinavian, Sardinian, and Iberian. The European fox is the subspecies that was introduced to Australia and Virginia. Red foxes in Australia are considered to be one of the 100 worst invasive species and are pretty harmful to native mammals and birds.

Posted by Abe the Cool Conservationist at 4:07 PM