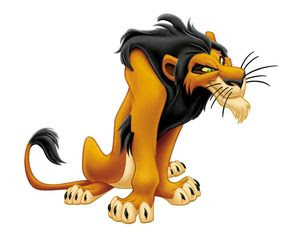 They're crude and unspeakably pain

But maybe they've a glimmer of potential,

If allied to my vision and brain

(singing) I know that your powers of retention

Are as wet as a warthog's backside

(spoken) But as thick as you are, pay attention!

(singing) My words are a matter of pride

It's clear from your vacant expressions:

The lights are not all on upstairs

Even you can't be caught unawares!

(singing) So prepare for a chance of a lifetime, be prepared for sensational news!

Shenzi: (spoken) And where do we feature

Scar: (spoken) For the death of the king!

Scar: (spoken) No, fool. We're going to kill him, and Simba too

Scar: (spoken) IDIOTS! THERE WILL BE A KING!

Scar: (spoken) I WILL BE KING! Stick with me and you'll never go hungry again!

To take certain duties on board

(singing) The future is littered with prizes

And though I'm the main adressee

The point that I must emphasize is;

(spoken) YOU WON'T GET A SNIFF WITHOUT ME!

Scar and Hyenas: (singing) So prepare for the coup of the century

Decades of denial (We repeat,)

Is simply why I'll (endless meat!)

be king undisputed, respected, saluted, and seen for the wonder I am (Aaaaaaaaaaaaaah!!)

Yes, my teeth and ambitions are bared!

Scar and Hyenas: Be prepared!

Yes, our teeth and ambitions are bared,

Be prepared!
Posted by Abe the Cool Conservationist at 9:54 PM