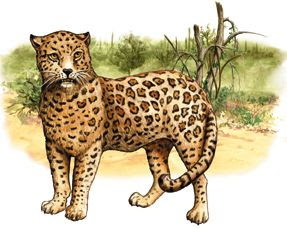 The Arizona jaguar (Panthera Onca Arizonensis) lived in Arizona, New Mexico, and Sonora. It was larger, longer and heavier than other jaguars in Latin America. Living in that more open habitat, the Arizona jaguar was more sandy in color than the jaguars in Latin America and its head was more rounded and with such legs, the jaguars could run fast and climb well and their homes were in dens and caverns and all jaguars like a diet of fish but in the arid deserts of Arizona, they were harder to find. The Native American tribes feared and revered the Arizona jaguar. The Arizona jaguar weighed 150 kilograms and 1.5 meters larger and its range was written by James J. Audubon, the famous American naturalist. It was hunted nearly to extinction in 1905. I noticed the species in a British show called Lost animals of the 20th century. European settlers brought sheep with them and the jaguar was a threat to them. There was more than 1 reason for killing the jaguars, wealthy ladies desired coats and jackets made from the beautiful skins but the coats never looked as good on the rich. Jaguars are the only member of the genus Panthera native to the Americas. Jaguars live in jungles but they are also found in the deserts of North America including Mexico, Arizona, New Mexico, California, and Texas. The word jaguar comes from the Native American Indian word "Yaguara" meaning "beast who catches its prey in a single leap." Jaguars used to be found everywhere in Mexico, even in Baja California and I saw its current and historical range. Some people call jaguars the American leopard or Ninja cat because jaguars are sly like foxes and people do call coyotes the American jackal. I'm gonna tell you the difference between jaguars and leopards, leopards are from Africa, Asia, and the M.E. (Middle East) and jaguars are from The Americas and extinct in Europe in prehistoric times. Leopards have rosettes without spots inside and jaguars have broken rosettes with spots inside. Jaguars are also one of the national animals of Mexico. Once, the Ancient Mayans believe that stars were spots on a big cat's coat. In 1997, jaguars were declared endangered in the United States.

Posted by Abe the Cool Conservationist at 5:35 PM