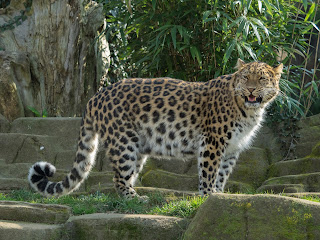 The Amur leopard (Panthera Pardus Orientalis), also known as the Far Eastern leopard, Korean leopard, Manchurian leopard, or Siberian leopard, is a critically endangered cat and is the rarest big cat in the world and it lives in the Amur or Ussuri region in Siberia, Manchuria, and Korea and there were 35 Amur leopard left in the wild and 300 in captivity. African leopards would never survive there and the Russian cats have thick fur to shield them from the cold. We must do everything to protect this beautiful cat from extinction! If we don't preserve nature, nature won't preserve US! The rarest small wild cat is probably the Iriomote cat of Iriomote island in Japan. In fact, it is one of the 2 leopards native to Russia along with the Persian leopard, which is also endangered. And 4 leopards found in China along with the Indian, North Chinese, and Indochinese. It is also one of the 7 Panthera cats found in Russia along with the Asiatic lion, Siberian tiger, Persian leopard, Caspian tiger, Anatolian leopard, and Snow leopard. The Asiatic lion is no longer found in Russia, it is now only found in Northeastern India like the Asiatic cheetah is now only found in Iran and those lions and cheetahs both used to live in India and Iran. The last cheetahs in India were killed in 1948 and like the recently extinct Honshu wolf of Japan, the Asian cheetahs worked with humans and were betrayed as vicious. The Siberian tigers were saved from extinction in the 1940's and there were probably 40 left but right now, there are fewer than 500 left and that is as endangered as the Ethiopian wolf and Iberian lynx. I don't know when the last lion in Iran died. The leopard is more endangered than the tiger. The Snow leopard's scientific name might be Panthera Uncia or Uncia Uncia but it's not completely a Panthera big cat and they are found in Southern Russia, Central and South Asia. All the Russian Panthera cats are on the ICUN red list and one of them is extinct and that's the Caspian tiger. This is an Amur leopard at the Colchester zoo in England. The Indian leopard is no longer found in China. I got some good news and bad news; The bad news is that in 2007, there were 19-26 Amur leopards left in the wild but the good news is that there are now 70 left in the wild; 50 left in Russia, 20 left in China, and no longer found in Korea. The Persian leopard is the largest of all leopards and the smallest is the Arabian. The Arabian leopard is also critically endangered! The Amur leopard is also one of the 8 big cats of Russia along with the Asiatic cheetah, Asiatic lion, Persian leopard, Snow leopard, Siberian tiger, Anatolian leopard, and Caspian tiger. The Caspian tiger is extinct and that endemic big cats of Russia lived in the Caucasus and the cheetah and lion also lived there. The cheetah now only lives in Iran and the lion now only lives in India!

Posted by Abe the Cool Conservationist at 7:44 PM