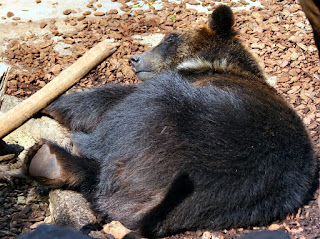 The Japanese black bear (Ursus Thibetanus Japonicus) is a small and probably endangered subspecies of Asiatic black bear native to the Japanese islands of Honshu, Shikoku, and Kyushu. They became extinct on Kyushu in the 1950's and they are critically endangered in Shikoku and there are 20 left in Shikoku and I don't know how many are left in Honshu. It is one of the 7 subspecies of Asian black bear along with the Formosan, Baluchistan, Himalayan, Indochinese, Tibetan, and Ussuri black bears and it is also one of the 2 bears native to Japan along with the Ussuri brown bear which is native to Hokkaido and some parts of the East Asian mainland. The bears of Japan were probably known to compete with the 2 recently extinct subspecies of gray wolves of Japan. The Ussuri black bear is the largest subspecies. The Japanese subspecies is probably endangered or critically endangered because when I saw the Asiatic black bear range, I saw its range in Japan. It's a good thing that the Ussuri brown bear or the black grizzly is vulnerable. The Japanese black bear is one of my favorite animals of Japan. The bears of Japan are probably the top predators of Japan. 4 subspecies are endangered including the Formosan, Japanese, Tibetan, and Ussuri. There is one black bear and brown bear in both Mexico and Japan but the Mexican and Japanese black bears are both endangered. It weighs around 60-120 kilograms for the adult male and 40-100 kilograms for the adult female and the average length is 100-140 cm. But bears aren't the usual top predators of the forests of North America or Eurasia, Siberian tigers are probably the top forest predators and maybe even Amur leopards, Asiatic lions, Asiatic cheetahs, and cougars but some bears can be the same size as those predators. The lions and cheetahs used to live in the Caucasus in Russia but now they are only found in Iran and India. The Siberian tiger is the 2 largest carnivorous land mammal but the polar bear is the largest but that lives in the arctic. This is why I want to go to Japan because of the exotic and cool animals there and also, I want to go on a quest to find the live extinct animals there including the wolves the Gloomy tube nosed bats of Tsushima, and the otters and when I find them, I'm gonna tranquilize them and build a zoo of extinct animals alive and put them in there so people will know what they look like. The Caspian tiger (Which also lived in Russia) and the Javan tiger are the only extinct tigers that might be alive still but the Atlas bear and Mexican grizzly are the only extinct bears alive. Like the Siberian tiger, Amur leopard, Ussuri brown bear, and Raccoon dog, the Ussuri black bear lives in Siberia, China, and Korea. The brown bear used to compete with the Hokkaido and the black bear used to compete with the Honshu. All bears in Japan are very rare like they are in Wisconsin and Mexico. Like other Asiatic black bears, the Japanese usually has a pale yellow crescent marking on its chest. In Japan, it's also known as "Tsukinowaguma" which means moon circle bear. Eastern Honshu is the only place where the bears have any kind of a stronghold. The population in Shikoku is as endangered as the South China tiger and the Vancouver island marmot.

Posted by Abe the Cool Conservationist at 5:27 PM