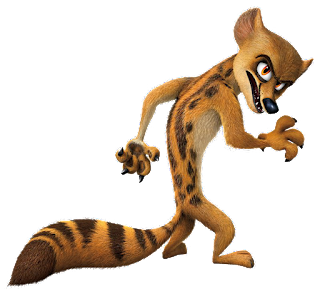 Karl is a self-proclaimed genius and is an antagonist in the "All Hail King Julien" Netflix original series. Part of Karl's history mentioned that he has a brother named Bruce who was better at things than him. After he did some attempts on King Julien's life where Mort took a blow to every attempt, Karl makes himself known to King Julien and invites him to his lair with the directs on the brochure. After Clover and Maurice are captured, King Julien makes his way to Karl's lair at a crashed zeppelin where Karl mentions his plans to raise the zeppelin and take over the whole world with King Julien as his partner. While Karl was ranting about his plans, King Julien manages to free Clover and Maurice. When King Julien, Clover, and Maurice exit the zeppelin, they are confronted by Karl who prepares to fire a laser at him until the balloon carrying the rocks with every wishes that the lemurs wrote on them for the sky god member Frank falls from the sky and lands on Karl. Seeing his "Surprise me" wish roll against him, King Julien took it as a sign that Frank had helped him defeat Karl. Karl is an eloquent yet violent enemy of King Julien. He obsesses over Julien to the point of leaving deadly traps and appearing in his bedroom late at night, multiple times, without alerting anyone. Despite of his flamboyant and playful nature, Karl seems well trained in the art of combat, enough to defeat Clover in a matter of seconds. He seems to have selective hearing, as he ignores a lot of what others say in favor of furthering the conversation. Karl's speech is often ominous, as he ends many of his sentences "Not yet, at least" or "For now." Although Karl exudes an air of confidence, he eventually reveals to Julien that no one has ever taken him seriously, and his older brother Bruce was always favored over him. Karl is a talented trap setter, enough so to set various traps for Julien, a lot which are deadly. Also, he is able to train even the deadliest animals, like crocodiles for example. He is capable of entering Julien's room (and presumably, other places) without leaving any hint of his presence until he wants it to be revealed. He managed to both incapacitate as well as Clover in less than a minute and can communicate with a hissing cockroach named Chauncey, who acts as his spy. It is implied, potentially for humor, that Karl has an experience in graphic design, as he designed his own font (which he refers to as "Karlvecica). Karl alsk has an inexplicable ability to light candles with mental command, though it seems to be for effect. Despite wanting to be recognized as the "Greatest mind in all of Madagascar," Karl is capable of being outsmarted. Julien's behavior takes him off guard on multiple occasions, to the point of Julien actuakky leaving the room while Karl is talking to him without even noticing. He also seems to have an inner-lying sense of low self esteem, which Julien regards as his "Issues." Karl has an obsession with King Julien, that the 2 have a destiny together. He seems to both admire as well as  extremely dislike Julien, appearing many times in his bedroom to compliment him, only to threaten him instants later. He also attempts to build memories of the 2 of them together by "Savoring the moment," though he plans to destroy Julien as soon as it is over. Chauncey acts as Karl's spy, pet, and close friend. Karl bosses him around and rewards his good doing with waste-matter, but it also appears that he has an incredibly strong soft spot for his hissing cockroach as he is often seen petting him, cooing at him, and even saying that the 2 of them "Know all about crazy" before making air kisses at him.

Posted by Abe the Cool Conservationist at 5:52 AM